Reviews, Photos, and Interview for Waiting For Godot

“THIS GODOT WAS WORTH WAITING FOR.”
— North Country Public Radio 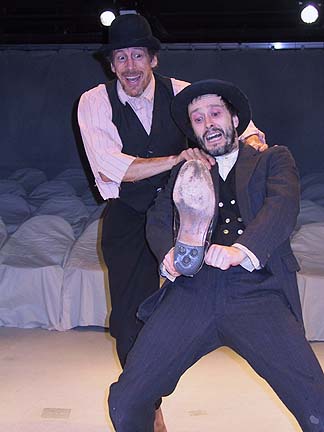 Andrew Sellon and Steven Hauck have delightfully developed their characters of Didi and Gogo.  The interactions between the thinking Didi and the simple feeling Gogo are at once comic and touching.  In the hands of these two fine actors, these characters are all too human.


Steven Hauck as Estragon and Andrew Sellon as Vladimir play really well together.  They’re a good contrast both physically and emotionally.  Their gymnastics and hat manipulations are great fun. Mr. Sellon’s Vladimir alternates between having the strength to support Estragon and a terrible fear and vulnerability.  During his long speech near the end of the play he shows us the true face of despair.  This Godot was worth waiting for. 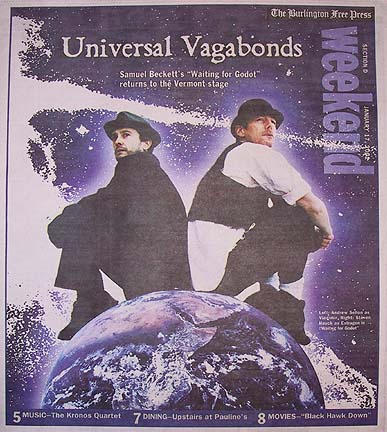 Perhaps more relevant now than it has ever been in its 49-year stage history, “Waiting for Godot” — a “show about nothing” created long before “Seinfeld” conquered the airwaves — wanders into Burlington on Wednesday and hangs out for a couple of weeks.

Presented by Vermont Stage Company in the suitably intimate confines of its FlynnSpace home, the run marks the first professional Vermont production of the challenging minimalist masterpiece in more than a decade.

The “tragicomedy in two acts” shines the spotlight on a pair of endearing and enduring vagabonds named Vladimir (Didi) and Estragon (Gogo), who struggle to survive and entertain themselves while passing the time and pondering their place in a world devoid of everything except for their need for one another.  With a sparse setting and simple story line, the seminal absurdist work by Irish playwright Samuel Beckett has lent itself to an endless variety of interpretations through the years. 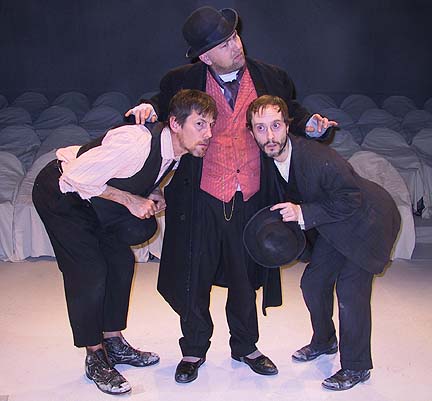 For the two actors in the lead roles, who both live in New York City, the play has added significance and timeliness in the wake of the devastating Sept. 11 terrorist attacks.  “Searching for meaning is what everyone in this country is doing now,” said Andrew Sellon, who plays Didi.  “It’s about coming together and getting together.  The whole point that Beckett is making is that neither of these two guys would survive alone,” he said.  “They’ve managed to keep each other going.””Their vulnerability is so apparent,” said Steven Hauck, who plays Gogo.  “In New York now, people’s vulnerability is apparent, and we’re people who aren’t famous for being vulnerable or nice or tender.  Now, everyone is looking to each other more.”

Though general impressions of the existential drama as a bleak or strange piece of theater will most likely always linger to some degree, the director of the production views it differently.  “There was some discussion about whether Godot was too intellectual or dark to sell tickets, but I’ve never seen it that way,” said Mark Nash, Vermont Stage artistic director.  “I see it as intriguing and, ultimately, there’s a great message of hope and faith in the play.  And it’s funny.  It’s just funny.””The thing about this play is it engenders a wide range of responses,” he said.  “I have a feeling that this one will run the gamut, and that’s what’s exciting for me.” 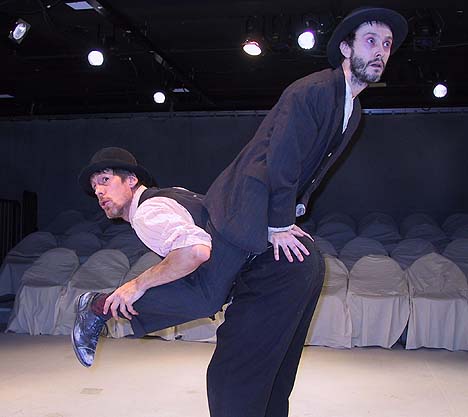 Written directly in French by Beckett in 1948, “Waiting for Godot” premiered in 1953 at a tiny Paris theater, where word quickly spread about the groundbreaking work.  The production came to the United States a few years later — Beckett translated it to English himself — and was well-received in New York, where it ran for 11 weeks.  Becket only directed in the States three times with all three taking place in prisons and using prisoners as actors. The play’s popularity in American theater started to grow substantially soon after its arrival. More recent treatments have included a 1988 Lincoln Center revival starring Robin Williams and Steve Martin, an Israeli production 10 years ago where the lines of Pozzo — the slave owner who appears briefly in both acts with his slave Lucky — were spoken in Hebrew while the rest were in Arabic, and even an online version where the stage is an Internet chat room.  The FlynnSpace shows will feature John Alexander as Pozzo, K. Blume as Lucky and Avery Croft as the boy.
“He definitely tapped into some timeless, universal themes about the nature of life,” Hauck said of Beckett.  Sellon added: “He was smart the way he wrote it.  He didn’t want to pin it down.  He didn’t want to date it.  He wanted it to go on for anybody, anytime, anywhere, and it does.”  Nash, who grew up in Charlotte and just turned 40, said the treatment given by Vermont Stage Company — in the midst of its seventh season and second in the FlynnSpace — would stay true to the early American performances that “walked the line between comedy and pathos.”

“I think that’s the key to it,” Nash said.  “I’d like to think that we’re mining it for its comedic value as well as staying true to the deeper questions that are being asked.””The beauty of the piece,” Hauck said, “is that these two elements exist — not only side by side, but interlaced.” 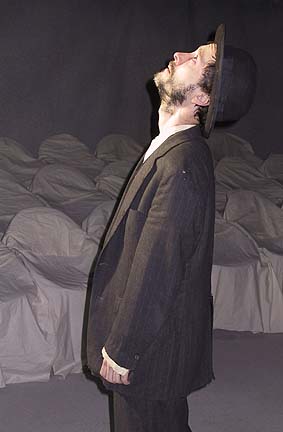 “No one acting style or approach is going to solve all your questions,” Sellon said.  “It’s like just taking out your entire tool kit and knowing that you may have to pick up any of the tools at any moment. ”  Beckett modeled his protagonists after classic comedians like Charlie Chaplin, Buster Keaton and Laurel and Hardy, and Nash said the actors will take advantage of every opportunity to “physically play in that comedic realm,” whether it’s Beckett’s witty, rapid-fire wordplay or the slapstick hat-changing sequence that they’ll add their own flourish to. “I think the audience can expect it to be entertaining,” Nash said.  “I intend to make these characters very recognizable and accessible, so that people — if they’re looking — will see themselves on the stage.  These guys are humanity in its most naked sense, and I think that can be a very comforting thing for people to take a look at.  Far from being bleak, I think it’s a ray of light, reminding us that we’re all part of the same human family.”