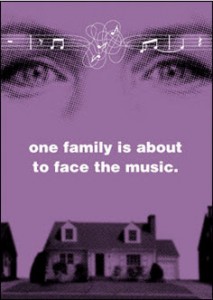 Tim and I caught Next to Normal a couple of nights before Alice Ripley left the Broadway cast.  Like a lot of people, we were a bit leery of what sounded like some pretty dark subject matter.  So we kept putting it off.  But we didn’t want to miss it, having heard such good things, and we certainly didn’t want to miss Ms. Ripley.  We first saw her perform when she went on in the role of Mrs. Walker the night we saw The Who’s Tommy.  We were absolutely blown away by her work, and couldn’t believe she was the understudy.  Then came Sideshow, in which she and Emily Skinner were nothing less than magnificent; they were that show, and utterly, utterly believable as the lovesick conjoined twins Daisy and Violet Hilton.  We also enjoyed them in James Joyce’s The Dead.

When we went to see Next to Normal, we were disappointed that Brian D’arcy James (another favorite since his astonishing work in The Wild Party) was out that whole week–something the show’s web site had not mentioned when we bought our tickets!  But Ms. Ripley and the rest of the superb cast did not disappoint.  It’s so refreshing to see a musical that embraces the form on its own terms, and succeeds so well.  And the theatrical device that authors Tom Kitt and Brian Yorkey employed (which I will not spoil here) was beautifully handled.  Michael Grief’s direction was admirably restrained and unfussy, letting the story speak for itself.  Was it a “feel-good” show?  Well, it was funny, thought-provoking, upsetting at times, and moving.  That’ll do nicely.   Ms. Ripley happily has a few months off to rest before headlining the national tour; it’s great that audiences around the country will have a chance to see her performance, and this powerful show, somewhere close to home.  Because that’s exactly where the show hits.  The new Broadway cast, meanwhile, now stars the wonderful Marin Mazzie and Jason Danieley (real-life husband and wife, for those few who don’t already know that!).  She deserved a Tony for her showstopping turn in Kiss Me, Kate a few years back, and he broke my heart in The Full Monty.  We may just have to go back to Normal.  And if you haven’t gone yet, you should.