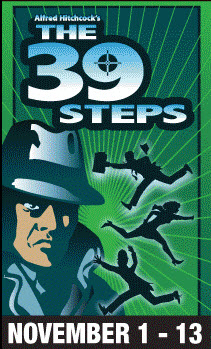 Okay.  I’m super excited.  First The Smurfs and now this!  My agent Renée and her associate Joe called from About Artists this afternoon to tell me I’ve landed one of the two Clown roles in the Maltz Jupiter Theatre’s upcoming production of the hit Hitchcock spy spoof, The 39 Steps!  I’ve been dying to do this show since I saw the NY production (which coincidentally included acting buddy Arnie Burton in a brilliant turn as one of the Clowns).  I love playing multiple characters, and I’ll be playing plenty of ’em in this show.  I also love Florida!  So this all works out nicely.

My thanks to Director Peter Amster, Artistic Director Andrew Kato, Casting Director Bob Cline, and the two wonderful readers who were there both for Monday’s initial audition and Tuesday’s callbacks.  My thanks also to Renée and Joe for ongoing enthusiasm and support.  Given how much fun I had at the auditions, I can’t wait to start rehearsals.  My partner Tim is already looking at the calendar to plan some Florida time with me.  It turns out Renée also represents one of the other performers who was selected, which means she represents half of the four-person cast!

The show starts rehearsals on October 11th, and runs from November 1-13 (closing on my birthday, which is kind of cool).  For more information about the production, click the image on this post to visit the theatre’s web site.  I hope I’ll see some of you there!  I’ll be one of the two guys in the hats.  And wigs.  And pants.  And dresses.  And phony moustaches.  And funny accents.  You get the idea…. 😉