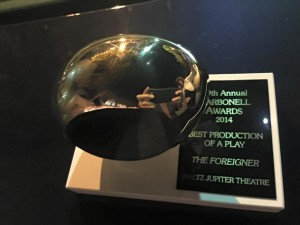 Last night, I attended the 39th Annual Carbonell Awards in Fort Lauderdale, Florida, as part of the delegation from the fabulous Maltz Jupiter Theatre. And I’m thrilled to share the news that our production of The Foreigner, in which I played the title character, beat out the impressive competition to land the coveted 2014 Best Production of a Play award!

Our terrific director, Matt Lenz, accepted the award on behalf of everyone involved in this special production. The Foreigner means a lot to me for many reasons, not just Charlie is a tour-de-force role. The script is incredibly inventive, and frequently downright hilarious. I’ve never done a play that made an audience laugh more. But by the end it also manages to be surprisingly touching, and seriously thought-provoking. Its messages of tolerance, and of the importance of second chances, resonate with every audience that sees it.

I am so grateful to have been Charlie for this wonderful production, to have been part of such a well-cast production, which included Michael Edwards, Brooks Anne Hayes, Matthew Minor, Maddie Jo Landers, David Sitler, and Carrington Vilmont. Our incomparable stage manager Brandy DeMil and her assistant stage manager, Neil Krasnow, kept us running every day like a well-oiled cuckoo clock. My thanks and congratulations to everyone involved in the production onstage, offstage, and in the administration at the Maltz Jupiter Theatre. It was a joy, starting with the auditions in NYC at Bob Cline Casting, to the first read through with the wonderful cast, to the sold-out, standing ovation closing performance with the wonderful Jupiter area audience.

My thanks to Bob Cline for bringing me in to audition. And special thanks to Matt Lenz for directing us with such a gracious and generous hand, and to the theatre’s brilliant Producing Artistic Director, Andrew Kato, for championing this play, this production, and me. I’m honored to have been a part of this terrific show, and so happy that we are ALL receiving this recognition from the South Florida theatre community. It means we made playwright Larry Shue’s voice heard.

To everyone involved, I can only say: Blasny, blasny!!