I’m appearing in a staged reading of a new drama by Sam Affoumado called Straight Talking.  It’s a play that examines the damage caused by “reparative 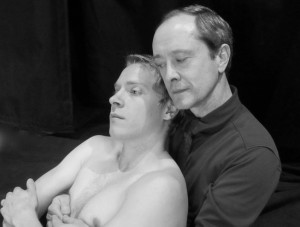 I play Jonah, a self-proclaimed ex-gay man who runs one of these misguided therapy practices.  My husband noted that George Bernard Shaw always gave his antagonists great arguments, and Sam has given my character plenty of almost-convincing things to say.  It’s exciting to play a character so completely at odds with who I am.  One of the things that keeps acting so rewarding for me as a profession is occasionally stepping into the shoes of someone I believe to be wrong, wrong, wrong, but must portray as believing himself to be absolutely right.

It’s a good cast and an interesting play.  If you’re around NYC on the evening of Monday 12/7 or Tuesday 12/8, both nights at 7pm, consider joining us.  It’s at the Playroom Theatre, 151 West 46th Street, 8th floor.  And it’s free.  To reserve seats, simply email saffu@aol.com and specify which night you want to attend and how many tickets you need them to hold at the box office.  Simple!  Right now there are plenty of seats for Monday, and still some left for Tuesday, as well.

I hope to see some of you there.