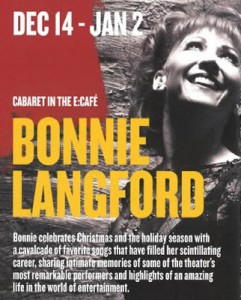 My partner Tim and I joined my buddy (and composer pal) Eric Barnes recently to see Bonnie Langford: Christmas in New York, a new cabaret performance that is part of the 59E59 Theatre’s “Brits Off Broadway” series.  Eric and Bonnie had worked together on the recent national tour of Chicago, with Eric on keyboards and Bonnie as Roxie.  I also fondly remembered seeing Bonnie as Mel, assistant to the sixth Doctor Who in the long-running British TV series.  Her remarkable career has had a number of other notable highs to date, including playing Baby June to Angela Lansbury’s Mama Rose, originating the role of Rumpleteaser in the original UK production of Cats, and scoring a smash in London as Sweet Charity.

Eric is also old friends with Bonnie’s music director and accompanist, the wonderful Michael Lavine.  As fate would have it, we ended up running into Michael and Bonnie before the start of the show, and they were both so gracious that after two minutes, I felt like I’d known them for years.  And in fact, in a masterstroke of unlikely fate, Michael astonished me by revealing that we had sort of met before: he had actually seen my Harvard College Hasty Pudding show, A Little Knife Music (my personal off-the-wall salute to Stephen Sondheim) many moons ago during the one week it played in NYC.  Very few people can claim that!

Bonnie was delightful in her show, and managed to pack in a lot of entertainment, both in terms of a wide variety of song styles, and some genuinely hilarious ‘coming of age in the business” stories from her own career.  Nöel Coward was particularly catty, but Bonnie has the last laugh.  Bonnie was ably abetted by Michael in a couple of duets (they make a very good team), and his playing throughout served each song beautifully.  While the uptempos and comic numbers were all delightful (and one allowed her to reveal some serious operatic chops), Bonnie was equally effective with a few simple ballads, making each one land gently, suffused with genuine feeling.  And happily, Bonnie threw in a few Doctor Who references for those of us in the know!  She’s had quite a life already, from child star in the UK at the age of 6 to her recent acclaimed performances in the US as Roxie Hart.  In fact, Bonnie finished her set with a sizzling selection of songs from Chicago that sent the capacity audience out on a cabaret high.  Try to catch this fun act if you can before it closes on January 2nd.  If you miss it, keep an eye out–luckily for us, Bonnie and her family have recently relocated to Manhattan, so here’s hoping she’ll be back with a new show in the spring!

You can read more about Bonnie and her career at her web site: www.bonnielangford.co.uk/.  And if you’re a musical performer seeking coaching, or trying to find the sheet music for a tantalizingly obscure theatre song, visit Michael’s site: www.michaellavine.net. He has one of the largest privately-held collections of sheet music in the world.  And he knows how to use it.