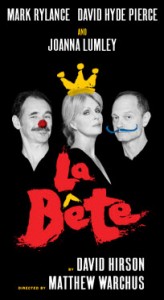 My partner and I caught one of the last performances of the Broadway revival of David Hirson’s verse comedy La Bete, and all I can say is it’s a crying shame it couldn’t at least finish out its originally planned limited run–and then run a whole lot longer!  I did not see the original, short-lived Broadway production, but my partner Tim did, and he tells me that in this version, the character of Valere is played much more down-and-dirty, much more a real seat-of-the-pants street performer.  It seems to have helped highlight the contrast between Valere and the high-minded Elomire (an anagram of Moliere).  It’s been a long time since I saw a play this funny, and with this much on its mind.  You could view the competition between the two men as a battle between bawdy, crude street theatre and classical tragedy, between Ego and Id, between Reality TV and Merchant-Ivory, or perhaps even between Republicans and Democrats!  The fact that the play is written in rhymed verse only heightens the fun, and the cast handled the sparkling language beautifully.

The three stars all shone very brightly indeed.  Joanna Lumley (the brilliant Patsy Stone of Absolutely Fabulous, and Purdy of The New Avengers, among other things), made her Broadway debut as the spoiled patron Princess.  She was alternately hilariously silly and cuttingly serious.  She had a wonderful moment where she sat in one of the side boxes at the gorgeous Music Box Theatre to watch the performance onstage.  Without an acknowledgment or wink to anyone, she took the rag doll (read: adult pacifier) that had been dangling from her gown, and sat it on the wall of the theatre box, stuffed face pointed at the stage, ready to watch the play with her.  The production abounded with inspired moments of silliness like that.  David Hyde Pierce as Elomire shouldered the huge burden of playing straight man to a comic cyclone with grace, and he too scored both in his withering criticisms and his genuine pleas from the heart.  He also had the unenviable task of saying nothing while Mark Rylance, so superb in Boeing Boeing, again demonstrated just what a remarkable, flexible, and deliciously shamless actor he can be.  The first part of the play is taken up with a 30-minute (no exaggeration) monologue for the sublimely fatuous Valere, and Rylance sailed through it brilliantly.  He and director Matthew Warchus paced this olympian feat of verbal silliness expertly, introducing a world of variety, and using both HydePierce and the delightful Stephen Ouimette (much loved from TV’s Slings and Arrows) to season and heighten the outrageousness of Valere’s narcissistic logorrhea.  Tim tells me that in the original production, the actor was entirely alone onstage, and used the audience as his audience instead.  While I didn’t see that production, I can tell you this approach to the difficult monologue worked superbly, and you almost wanted Rylance to just keep going.

Playwright Hirson does a crafty job of setting up the audience for the inevitable battle between the established, scholarly Elomire and the upstart clown Valere for the patronage of the mercurial Princess (a Prince in the original, by the way; the sex change is purportedly the only change Hirson made in his script for this revival).  And it’s to Hirson’s credit that by the end, you may join the Princess in questioning which of the men is, in fact, La Bete (the beast).  I’d say they both had some beastly traits, and that perhaps the artistic middle ground the Princess sought might not be such a bad goal after all, though unachievable between Valere and Elomire.  But there’s no question that the denouement is a sobering and thought-provoking one.  Perhaps it’s inevitable that Reality TV will win in the end?

It’s a wonderful play, and if you didn’t see the Broadway revival, I hope you are able to see it in an excellent regional theatre production near you.  In fact, I hope I’m in the production.  I would jump at the chance to play either Valere or Elomire; I’m constantly being asked “Why don’t you understudy David Hyde Pierce, or play his brother or something?  You guys could be twins!”  I think the ultimate would be to do another production where the two actors trade off playing the two roles.  That might be gilding an already well-gilt lily, but it sure would be fun.  Bravo to all involved in this Broadway revival, and thank you all for giving Broadway something to think about.  Something very timely indeed.