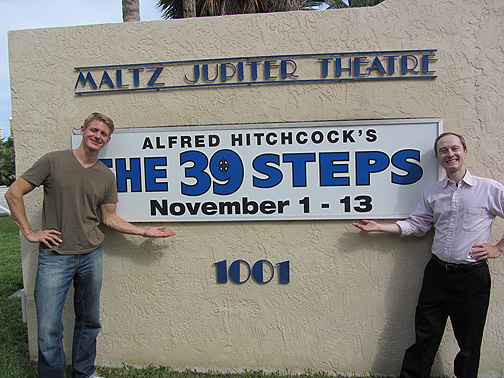 Wow, this rehearsal period has flown by!  It feels like I just stepped off the plane in sunny Florida the other day, and yet last night we gave our first preview performance of The 39 Steps.  It went very well indeed, and we’re looking forward to putting the show in front of more audiences this week and next.  After all this intensive work, it seems a shame that we’re only running for two weeks–but it’s great that the run is already 86% sold!

Artistic Director Andrew Kato set the perfect tone on the first day of rehearsal, by having everyone in the building join the cast and production staff for a meet and greet session.  His message was simple: everyone in the building is there to help us present the best production possible.  The staff members with whom I’ve interacted have certainly gone out of their way to be helpful.  The theatre’s guild even provided us with welcome beach bags full of useful goodies, and cooked us a wonderful dinner during tech weekend.  In short, it’s a pretty great place to work.

The rehearsals themselves have been fantastic–director Peter Amster created just the kind of democratic, respectful, playful, let’s-see-what-we-discover environment that I love.  And this despite the fact that he’s directed the show many times before.  He freely admitted that while he knows what has worked in past productions, he knows that the play inevitably has a different “fit” when worn by a different set of actors.  So while we benefited from his extensive expertise with this demanding script, we also were given carte blanche to get out there and surprise him.  We laughed a LOT.  Christian Pedersen (pictured here with me in front of the theatre’s marquee) plays our hero, Richard Hannay.  Beth Hylton (a fellow grad of UNC-Chapel Hill’s MFA Acting program, and also represented by my agent, Renée Glicker of About Artists) plays the three women he encounters, and Joe Foust and I play the two Clowns who become all the other characters.  Joe is the only one who has done this script before, as he was in a prior production for Peter.  I think all four of us in the cast feel especially good that despite Peter’s vast experience with the script, we’ve still managed to come up with new interpretations and storytelling details that he hasn’t seen before.  And in turn, Peter has come up with a lot of great new ideas to enhance this production–including a hilarious final image that involves one particularly silly final costume change for me.  I’ll have to get a picture of that one to share!

We’ve also been blessed with the incredible staff at the Maltz Jupiter Theatre, including enthusiastic Associate Producer/Company Manager, Rachel Blavatnik, our unflappable Production Stage Manager, Brandy DeMil, and her resourceful Assistant Stage Manager, T. Scott Wooten.  The design team has done a wonderful job of making the production look gorgeous.  I plan to do a separate post to talk a little bit about the production design, hopefully with some photos!

If you’re going to be in the Jupiter, Florida area, I encourage you to come down and see this charming and very silly show.  The cast is wonderful, the script is a hoot, and you don’t need to know the films of Alfred Hitchcock to have a great time.