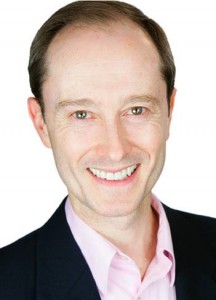 I can certainly say that 2011 wasn’t dull.  For one thing, The Smurfs movie came out.  And even though only a few seconds of my one scene made it into the final cut of the film, that fleeting onscreen appearance was enough to make our 10-year-old nephew Nicholas very excited.  Watching the film in 3D with Tim, Nicholas, and other family members was one of the highlights of the year for me.  You can see a picture of us at the movie theatre in a prior post.

I also had the opportunity to perform in two productions this year that probably couldn’t have been more different from each other.  I was hired to play Pastor Manders in an updated version of Ibsen’s classic melodrama, Ghosts, as the inaugural production of the Classic Play Series theatre company.  Roles like that are one of the reasons I love acting.  Pastor Manders represents many things that I personally abhor.  He allows his devotion to rigid rules and social conventions to blind him to simple human truths and needs.  And yet under pressure, in the end he is willing to compromise his high morals just to save his own skin.  At first glance, not a very sympathetic character.  I’ve only seen one production of the play, back in Boston when I was in high school.  I remember feeling that Manders came across as too much of a villainous straw man serving Ibsen’s social commentary to be very convincing as a living, breathing person.  I couldn’t see why Mrs. Alving would listen to him for a minute! 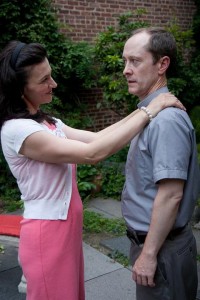 With Antoinette LaVecchia in Ibsen’s “Ghosts”

So I thought it would be quite a challenge to create a believable Paster Manders who lives and thrives in 2011 while still honoring the character’s purpose in the script.  And on revisiting Ibsen’s play, I found so much that simply didn’t come out in the production I saw–so much love for Mrs. Alving, in particular!  It’s the relationship he secretly still wants but cannot ever acknowledge or consummate.  I think Ibsen meant it as a true, deep love–the best part of Manders.  That delicate balance was beautifully preserved in the modern adaptation of the script we used.  As we worked, I found an enormous amount of love and good will in Manders, and director Emmy Frank enthusiastically encouraged me to go with this more textured approach.  I used that to inhabit him and embrace his goals for the duration of the story.  The result was very satisfying.  His attempts to do the right thing were still spectacularly misguided, he still made the same horrible choices, and he still ruined people’s lives by not following his heart.  But I feel like I made him more credible as someone Mrs. Alving might actually love, admire, and turn to for guidance.  It was one of those classic “walk a mile in the other man’s shoes” experiences that makes acting such a rewarding ongoing journey of discovery. 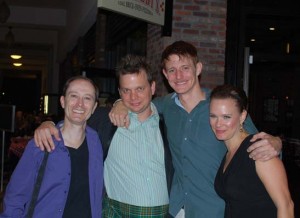 And then later in 2011 I had the joy of being cast as one of the two multi-role Clowns in The 39 Steps for the Maltz Jupiter Theatre in Jupiter, Florida.   The first day, Artistic Director Andrew Kato introduced the entire staff and said they were all there to help us–and he meant it.  And the story onstage was even better.  We laughed ourselves silly through the all-too-brief rehearsal period, and prided ourselves on getting through the run with no broken bones, despite the high-speed antics during every performance.  It may rank as the most physically exhausting show I’ve done so far in my career, but it sure was a blast.  And come on–what actor could wouldn’t jump at the chance to play a mix of characters including a naughty Cockney milkman, a sex-starved Scotswoman, and a ruthless (and of course totally bonkers) Nazi villain.  At last, someone let me play the bad guy!  Thank you, Peter Amster and Andrew Kato, for a terrific experience.  You can see a gallery of great photos and read the reviews by clicking the image, or by clicking here.

The year wasn’t all theatre magic, of course.  My dear friend, the very fine actor Donald Grody, finally lost his long battle with prostate cancer.  We had done two productions of King Lear together and I hoped to do other shows with him as well.  And he was a good friend and true mentor offstage.  I’m so grateful to have had him in my life for the last few years.  If you want to know more about Donald, I wrote a post about him earlier this year.  Donald was not a man to brag, but every professional actor out there owes him a deep debt of gratitude for all he accomplished when he was Executive Director of Actors Equity; it’s a remarkable list of very important achievements that continue to benefit union actors to this day.  And November marked a year since my father’s passing.  Some years ago, I wrote a lyric that in one verse anticipated losing him eventually, and says simply “I still think of him every day.”  Sure enough, I do.  And his passing makes me think of my late mother a lot more, too.  Grace to them both. 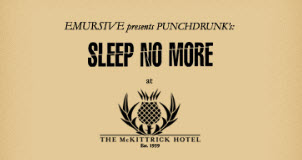 And then there were all the shows Tim and I went to see!  Gosh, too many to list at this point.  We very much enjoyed The Book of Mormon–and I was amused to discover that it’s basically a very traditional, almost retro book musical that happens to have a potty mouth.  We also quite liked the revival of Follies.  And the list goes on and on.  But perhaps the one production that stands out most in my mind is Sleep No More–the immersive, subversive gothic dance/theatre event loosely based on Shakespeare’s Macbeth, with a bit of Hitchcock’s Rebecca thrown in for good measure.  I had never gone to an immersive theatre piece for the same reason I generally avoid stand-up comics: fear that the material just won’t work.  Well, Sleep No More works like gangbusters.  I went with my old hometown friend Liz Law, and when we compared notes breathlessly at the end of the three hours, we found we’d seen almost entirely different events!  The cast is almost silent, but speaks eloquently through the sometimes alluring, sometimes bruising, always compelling choreography.  The set decor is enormously decadent and spooky, and there’s five floors of it to explore.  There is nudity, violence, blood, smoke, strobe light, and a lot of spooky film noir-ish music.  It’s definitely an evening about sex and death.  And then some.  And definitely not for anyone under 18.  I went a second time and had the pleasure of seeing some scenes again with the other cast (they are equally wonderful), and exploring some new characters and scenes as well–including a couple of one-on-one encounters that were really mind-blowing.  In one, I found myself locked into a hut having tea with an ominous, fortune-telling nurse.  In another, I was pulled into a silent scene with a “drunken” charactor who wanted my help–and I had to figure out what he needed quickly and without words.  The whole sequence lasted probably about 5 minutes, overseen by a silent group of other masked visitors like myself, so it was simultaneously public and suprisingly intimate.  It was magical.  The first time I went, I was strictly one of the many silent observers; I was definitely rewarded for taking more chances the second time around.  I fully intend to see SNM at least once more.  If you go, follow these tips: 1) Dress very comfortably, and wear sneakers, 2) Don’t bring any bags/purses unless you’re prepared to pay to check them, 3) Be prepared to run (sometimes very fast) up and down warehouse stairwells and dark hallways in pursuit of characters whose lives capture your interest, and 4) If an impulse to explore grabs you–follow it!  As the elevator operator announces before sending everyone out into the dimly-lit playing area: Fortune favors the bold.  You can read more and buy tickets by clicking the image or by clicking here.

So, I don’t know what’s in store for 2012 yet, but I certainly have my to-do list of roles I want to play (and some I’d love to revisit).  Tim and I are drawing up a list of places we want to go; I loved my first trip (ever) to San Francisco this year, especially as it was for our niece Rachel’s wedding in May.  Then we had our niece Kerry’s wedding in October, and shortly after that, our nephew Matt announced his engagement.  And of course, same-sex marriage was FINALLY approved in New York State in 2011, so Tim and I are looking into getting married in 2012–after more than 18 years together.  I’m gearing up to make the new year full of exciting new adventures onstage and off.  I don’t know about you, but I plan to be bold!