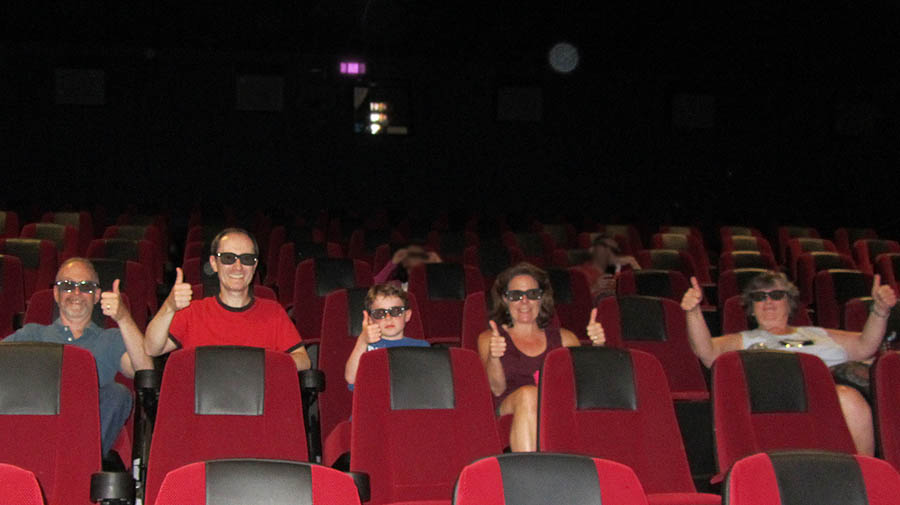 On Sunday, Tim and I went to see the Smurfs movie in 3D with our nephew Nicholas, his mom Patty, Tim’s brother Danny, and his wife Ginny.  We went to the brand new Ridge Hill multiplex here in Yonkers–it’s one of the only things open in this massive development (which is so big they may actually end up declaring it a village!).  We made sure to get there good and early, prepared to take silly pictures next to the movie posters in the lobby, only to find out there weren’t any at this theater!  So instead, before the action started, Danny kindly took this picture of us to mark the occasion of my major motion picture debut.

As it turns out, only about 1/3 of my little scene made it into the final film, so I’m really only onscreen for about 7 seconds.  But I still interact very briefly with Hank Azaria (aka the villainous Gargamel) and hey, I’m up there.  My thanks again to director Raja Gosnell for casting me and keeping a bit of the scene in the final film.  As soon as I walked offscreen, Nicholas leaned over to me and whispered: “You were great!!” which really made my day.  I told his mother later that being in a movie is indeed really cool, but being in a family and sharing little moments like this–now, that’s great!

Nicholas noted that we needed to stay and watch the credits at the end so that we could see my name.  When the credits rolled, he pointed out: “Look!  You’ve got a mushroom next to your name!”  Evidently in the Smurf world, that’s a good omen.  So if you end up seeing the movie and checking out the credits, look for the little red mushroom.  😉  Rumor has it that if this film makes enough money, Hank Azaria has already signed on for two more.  So maybe we’ll cross paths again at greater length in a sequel!  (And maybe the full version of the scene will show up on the DVD bonus reel…!)