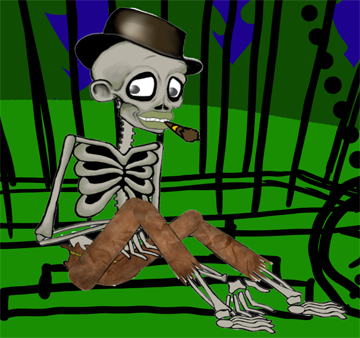 I recently contributed my voice to an animated short film being created by the very talented writer/director/animator Alexandra Huzsvai.  The piece is called Majnun’s Dream Theater Shadow Show, and I play the role of The Living Skeleton, a mysterious character who appears before the heroine when things look bleak.  I’m delighted to be able to share this conceptual rendering of my character, courtesy of (and copyright by) Alexandra.

When we went into the studio to record the Skeleton’s lines, Alexandra noted that she sees him as someone who was possibly a jazz musician when he was alive.  And in all her renderings, he still sports a lit cigar, so I suggested that perhaps the smoking was what killed him!  She wanted to make sure he came across initially as a character whose motives were unclear, and I suggested that sounded a bit like the Cheshire Cat, an association she loved.  Yet ultimately, he reveals himself to be something of a spirit guide for the heroine.  So I had great fun working that all into my vocal interpretation of the Skeleton’s lines–cool, oblique, raspy breath, playful, yet ultimately kind.  Voiceover work can be so liberating for an actor–you can’t be “typed out” of a role because of your own height, weight, age, gender, etc.  Instead, the only limitation is your own vocal imagination.  It’s a blast.

As I mentioned in a previous post, I think the script for this short film is terrific.  It’s surprising and intriguing, and underneath there’s a strong message about the importance of recognizing and leaving an abusive relationship.  The script is particularly effective in the way Alexandra uses visual metaphors to depict the heroine’s gradual awakening.  I’m delighted to have been part of the project, and can’t wait to see the finished film later this year!  My thanks again to Alexandra for permission to share this sneak peek at my character well ahead of the film’s release.

After the recording session, Alexandra and I chatted briefly, and conversation revealed we both originally hail from New England.  Even bigger coicidence: it turns out we were both born in the same hospital in Cambridge, MA, and grew up in towns right next to each other!  I love “small world” discoveries like that.  It’s a good omen.