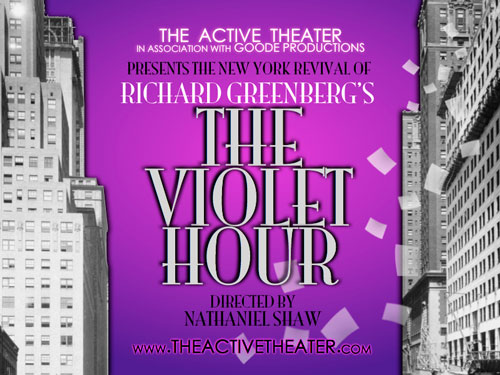 I’m getting extremely excited about this production of The Violet Hour.  The more we explore Richard Greenberg’s dazzling and intricate play, the more funny, heartbreaking, and profound it seems to become.  This is a beautiful piece of writing that deserves to be a major hit.  And I have to say, this production is looking like a winner.  All that’s needed is a perceptive theatrical producer to catch this production during its limited run and move it to an Off-Broadway venue for an extended run.  Yes, after two weeks of rehearsal, this revival is already looking that good.  My fantastic fellow performers are John P. Keller, Cheryl Freeman, Lincoln Thompson, and Heather Lee Harper.  Kerri Lynch is our resourceful Production Stage Manager, and Nathaniel Shaw (co-founder and Artistic Director of The Active Theater)  is our insightful and inspiring Director.  All five roles are incredibly challenging and equally rewarding.  And Nathaniel is weaving everything together beautifully.

The basic storyline is simple: It’s April 1st (note that date), 1919.  The Great War to End All Wars has just ended.  The world is starting to hope again.  In Manhattan, John Pace Seavering, a young man from a wealthy family, is trying to launch his career as a publisher of great literature.  But he can only afford to publish one book, and can’t afford to make a mistake or he may be ruined before he starts.  Should he pick the sprawling, unwieldy burst of genuis from his less privileged college friend Denny?  Or the pure, uncluttered autobiography of Jesse Brewster, a beautiful, mature, self-made black celebrity?  When he can’t bring himself to make a choice, Fate steps in, and the game changes in ways that no one could have seen coming.

The Violet Hour has not been seen in New York since its 2003 Broadway premiere, and now that we’re in the thick of rehearsals, all I can say is that it’s more timely and thought-provoking than ever.  I love a play that makes me laugh, breaks my heart, and makes me gasp.  The Violet Hour does all of that, and more.  It will challenge you to take another look at the world around you.  It will surprise you.   And isn’t that sorely missing in a lot of the theatre you’re seeing these days?

You can see more about the production and the team by clicking the image on this post to visit The Active Theater’s web site.  From there, you can also see the performance calender and buy tickets.  The show plays March 9-25 at the Workshop Theatre, 312 West 36th Street, 4th floor, NYC.  I urge you not to miss this production.  One performance is already sold out.  If you’re a casting director or anyone in the entertainment industry, you will want to see this play and these performances.  People are going to be talking about this one.