Late last Friday night into early Saturday morning I filmed a scene for Can a Song Save Your Life?, written and directed by John Carney (Once), and starring Mark Ruffalo and Keira Knightly.  The shoot had to be done overnight because the scene was set in a moving NYC subway car, and late at night at the end of a subway line was the only time a real station and train could be used.  I played a man the script titles Christian Father, a quiet man with a well-worn bible and a handful of prayer pamphlets.  Honestly, it all went so smoothly that it was over almost before it began.  John and Mark couldn’t have been more gracious and fun.

When John introduced himself before the first take, he mentioned he wanted to add a new line.  He also said he liked the line improvs I did on my audition clip, so I should just keep those.  I think we ended up doing only three takes of the brief scene; each time Mark reacted slightly differently to me, and I had great fun responding to whatever he sent my way.  I’ve never had a nicer or more generous scene partner, and hope I get to play with Mark again one of these days; he is seriously fun.  When it was all done and I was wrapped, I thanked John for a great time.  He has a great attitude and energy, and I would love to do another project with him.  Even though we were under a time constraint, everyone was working smoothly and having a great time doing it; that doesn’t just happen by itself. 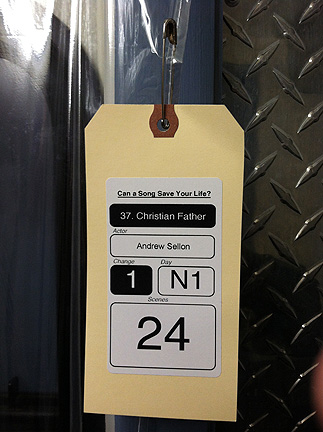 As with my experience on the set of The Smurfs, every single person with whom I came into contact was incredibly nice as well as talented.  Mariela Comitini (first AD), Maura Kelly (second AD), Arjun Bhasin (costume designer), Deirdre Wegner (asst. costume designer), Patrick, Joanna, and so many more.  While waiting outside my little honeywagon, I had a good time chatting with the actors who make up the “band” in the film before they shot their scene that night; what a bunch of sweeties.  I also had a great extended conversation in the wee hours with a lovely young woman named Grace, who lived up to her name, looking after me and getting me where I needed to be when I needed to be there.  The funny thing about a movie shoot is that while there’s typically a lot of waiting in the process, once your scene is up for shooting, time is of the essence, and you meet a whole bunch of wonderful pros for very fleeting discussions and arrangements.  Someone hands you a cool prop, one or two other people are wiring your mike into your costume, while someone else might be sharing last-minute instructions with you.  Suddenly things fall into place, the others vanish, the director calls “Action!” and in no time the whole thing is over.  You never get to go back and thank all those folks again for the great job they do!

John has written a lovely script, and has surrounded himself with a great bunch of performers; in addition to Mark Ruffalo and Keira Knightly, the cast includes Catherine Keener, Hailee Steinfeld, James Corden, and Adam Levine.  Given how beautiful John’s film Once is, I have high hopes for this one, which shares a spiritual kinship with that hit.  Anyway, my thanks to John, Mark, and all involved for a swell time.  I can’t wait to see the finished film!