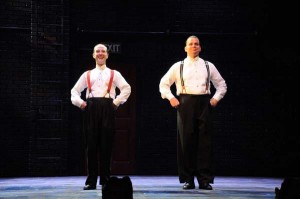 Here’s another installment of my tips for aspiring actors series:

Anytime you’re asked to perform a scene for an audition, the casting director or producer will provide a person to act as the Reader opposite you. The Reader may turn out to be an excellent actor, or in some unfortunate instances, a casting admin drafted at the last moment who stumbles over the words. It may be a love scene and the Reader may not be the designated sex, or age, or type, or whatever.  It’s your job as auditioner to make the Reader whatever you need him or her to be to kick the scene into orbit.  Granted, sometimes the substitution is a big one!

Smart casting directors know it’s in their best interest to provide a top-quality actor as Reader, to bring out the very best from each auditioner. After all, a scene should be about the back and forth, the little bursts of spontaneous, honest discovery that performers bring out of each other.  Having a deadwood Reader in the room makes your job a lot harder.  But if it happens, continue to play the truth of the scene and work to engage the Reader as much as possible with strong actions. The casting folks will be aware that  the Reader isn’t giving you much, and one of the things they’ll look for is how you well you stay honest in the face of that challenge.

Always make sure you greet the Reader pleasantly when you’re introduced. If casting neglects to introduce the Reader, whenever possible, take that quick moment to say to the Reader discreetly: “Hi, I’m __________, nice to meet you.” And give them a genuine, confident smile to encourage a connection before you read. At the end of the audition, as much as possible, make a connection visually with everyone in the room one last time as you thank them.  And always thank the Reader sincerely, whether they supported you beautifully or gave you nothing.

If you haven’t been a Reader, you should do it a few times; it’s an invaluable learning experience.  You will see how well (or poorly) others audition. And you will hear incredibly helpful things from the brief conversation in the room after the auditioner leaves.  You’ll hear frank discussion of what the casting folks liked. What they didn’t. Who earns a callback and who doesn’t–and why.   On very rare occasions, the casting folks may even ask for your feedback on a particular auditioner.  If this happens, be gracious and brief.  Never volunteer your views.

You will also hear the casting team discuss pros and cons about what that actor is like to work with, if the casting director or anyone else in the room is party to that information from prior jobs. If the actor is getting a reputation as difficult onstage or off, or even just habitually late, or habitually unprepared for auditions, it’ll come out during the brief discussion.  Trust me; I’ve seen it many times.  If the actor is known as a real pro and a joy to work with, the producers and director will literally breathe a sigh of relief to hear that, and that audition will be viewed in a much better light.

And of course, keep in mind that when you act as a Reader, you are not secretly there to try to land a role in that show.  You are not there to dazzle the casting folks; you are there to act as support for each and every actor who walks into the room.  Whenever possible, make sure you are extremely familiar with the script sides, so that you can focus on the auditioner and play the scene freely.  If you give quality support to the auditioners in the room that day, rest assured that the entire casting team will notice, and will file that away mentally for another time–when it’s your turn to audition again!

I remember one instance when I was asked to be the Reader for a theatre I had worked with many times.  They were casting the role of Amanda Wingfield in The Glass Menagerie, and I read the role of Tom, the unhappy son.  Some of the actors who came in didn’t acknowledge me at all, they just started the scene and aimed their performance exclusively at “the house.”  They didn’t engage with me on any meaningful level; they just trotted out what they had worked up outside the audition room.  Others did engage with me to some degree when they were speaking, but still didn’t listen and allow themselves to respond spontaneously to whatever I might have given them on a particular line.

Then one actor came in, did an excellent job of connecting with everyone in the room, including me, and proceeded to play the scene with me as if we were the only two people present.  She surprised me, I surprised her, we were Amanda and Tom for those three minutes, and the scene soared right there in that little 8’x10′ audition room.  The effect on the casting team was immediate and palpable.  While there were a couple of other very good auditions that day, this actor stood out.  I was not at all surprised to learn later that she had landed the plum role.  And what was the last thing that actor did before leaving the audition room?  She looked me in the eye and said quietly: “Thank you for really playing the scene with me.  That made all the difference.”  It does.