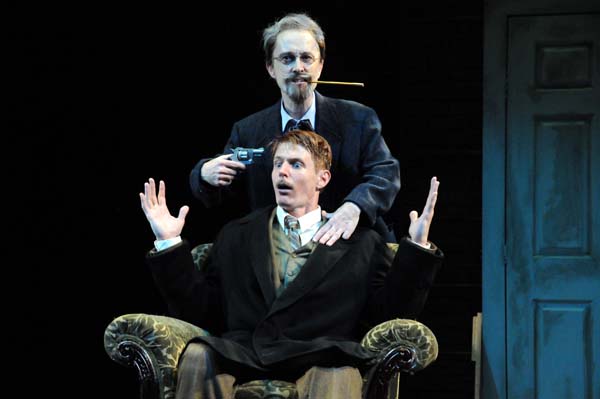 Occasionally, I post about the importance of professional behavior at auditions.  Call me Mister Manners.  Since it’s getting close to Halloween, I decided it’s time for another installment.  I was at the lovely new Actors Equity lounge (with free wi-fi!) in Midtown NYC one afternoon between auditions the other day.  While there, I witnessed some frightful behavior by actors in the waiting area that may serve as further cautionary tales of terror for those of you new to the business–or anyone just needing a little reminder.

The audition in question was a required EPA call for a play at a well-known Manhattan classical theatre.  The company was seeking males only.  Most auditioners conducted themselves with grace in the waiting area.  But, sadly, there were exceptions.  The Equity audition monitor was a young woman who demonstrated remarkable reserves of calm in the face of a number of awkward moments.  One older man arrived eager to engage anyone and everyone in idle conversation.  He apparently didn’t see the sign asking people to refrain from loud conversation, and proceeded to make his sign-in process as noticeable to all as possible.  He asked if any audition slots were available, and when the monitor said she could in fact get him in within twenty minutes, he actually hesitated, and speculated aloud as to whether he could really wait around that long!  He decided he would consent to wait, and the monitor  asked him to have a seat.  He then looked my way and announced loudly in a general tone: “This process is a pain in the ass, and I’ve been doing it for 30 years.”  If he’s been behaving like that for 30 years, he must have a lot of free time on his hands.

A little while later, another older man walked up to the monitor’s desk.  She asked if he’d like to sign up for a slot.  He sniffed and said “Well, who’s in the room?”  He looked at the information sheet on the desk, and proclaimed loudly: “Only a casting assistant!  Not worth the trouble.”  And he swept away.  But when he got to the other end of the room, he swung around, went back to the table, and demanded of the monitor: “Was the casting director here at all?  For how long?”  She said he had been there twenty minutes that morning.  “Twenty minutes?!” the man exclaimed.  “That’s an insult!”  And with that, he strode out of the room, making a big exit.  He may not have given his name, but he left his calling card all the same.  I was impressed that the monitor didn’t even bat an eye.

As that man left, another arrived, signed in, went in to give his audition, and came back out again, all without incident.  But then he sat down right near the monitor and took out his cell phone.  He called someone who apparently did not make him happy.  And suddenly the whole room resounded with his side of the disagreement.  He got off the phone with that person, and immediately called another to resolve what he had discussed with the first person–all in terms that can only be described as unadulterated whining.

Shortly afterward, another man strolled up to the desk, and said loudly “Is this a comedy?  Drama?  What the hell is it?”  (I’m not making any of this up.  Honestly.)  The monitor gave him a quiet answer, and gave him a slot.  He said “Hello, Frank!” to the whining man who was at last exiting.  A few minutes later, the monitor asked if he was ready to go in.  He put his hand up to her and said: “A minute.  I’m still trying to decide which of these lousy monologues to try.  You think I should go with the way I’m feeling right now?  That could be trouble.”  As the question seemed rhetorical, the monitor wisely opted to ignore it and simply waited to conduct him into the audition room.

So, dear auditioner, what can we learn from this frightful behavior?

Show everyone respect at your audition, and the theatre just might show you a contract.