Well, all good things must come to an end, they say.  Last night, we gave the final performance of Frank Galati’s beautiful production of Brian Friel’s Philadelphia, Here I Come! And at this afternoon’s matinee, we also say farewell to Peter Amster’s sublime production of Chris Durang’s uniquely wonderful Vanya and Sonia and Masha and Spike. My thanks to the directors, designers, stage management, staff, cast and crew for both productions; both shows have been fantastic experiences, filled with humor, love, and great generosity of spirit.

Saying goodbye to the role of Vanya, and to this production of Vanya, is especially difficult. I have loved every minute of exploring and sharing, with Peter, with my five fellow cast members, and with our absolutely fantastic audiences here in Sarasota. 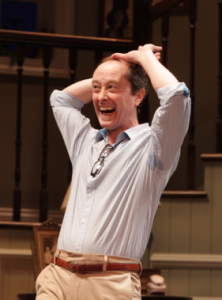 On the surface, it might look like the role of Vanya would be a walk in the park for me–after all, Vanya is a gay, middle-aged man who lives in Bucks County. And I’m a gay, middle-aged man who vacations in Bucks County! But while my own life and my first-hand knowledge of Bucks County has only deepened my appreciation of this beautiful script, it’s not easy playing a mild-mannered, long-suffering character for two hours who then suddenly loses his cool and has an insane ten minute meltdown at the end. Peter and I both felt strongly that while the tirade is hilarious, it should also cut much deeper–much more into true Chekhov heartbreak territory. After all, Vanya is seeing his entire world collapse before his eyes. With Peter’s gentle, confident guidance, I unleashed both the wackiness and the darkness underneath, and entered some new territory. Spike may be the character who repeatedly takes off his clothes, but in the end it is Vanya who lays his soul bare for all to see. The audience reaction has been all that Peter and I could have wished, and I’m so grateful for the chance to take this exhilarating ride.

And while it’s bittersweet to let go of Vanya (at least for now!), we can all point with pride to one terrific fact that I learned last night from Michael Donald Edwards, Asolo Rep’s wonderful Producing Artistic Director: Our production of Vanya and Sonia and Masha and Spike has become the top-grossing non-musical production in Asolo Rep’s entire 55-year history! That’s a darn good way to go out. 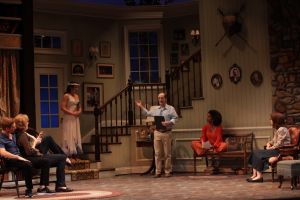 Thank you again to everyone who has been involved in this production, and who came to see it and cheer us on. We have all shared something very, very special.  I will miss this one.  And I will never forget it.