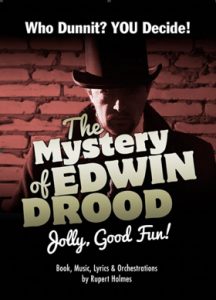 If you’re not familiar with the show, it’s based on the mystery novel Charles Dickens left unfinished at his untimely death. Dickens left no hints as to where the plot strands would end up, so the multi-talented composer-librettist-lyricist Mr. Holmes decided to play detective himself, and created the first interactive show on Broadway. The original production was nominated for 11 Tony Awards, and won 5–with 3 of them going deservedly to Mr. Holmes.

The show takes place at the mythical Victorian theatre, the Music Hall Royale. In the course of the evening, the audience gets to vote on the real identity of the mysterious detective Dick Datchery, as well as of the murderer, and even which two characters (however unlikely!) end up as lovers by the final curtain. This means those of us in the show have to learn all the possible endings the audience might select, and be ready to perform any of them at a moment’s notice, based on the audience’s voting. It’s insanely fun. This is fantastic show for audience and performers alike–a true gift to theatre lovers (and mystery and Dickens lovers).

We play January 16-February 4 only, at the intimate WaxLax stage of Riverside Theatre. The cast is simply terrific–beautiful voices, and great comic timing. There are only about 150 seats per performance, so if you’re going to be in the area, buy your tickets now. In fact, if you want a chance at seeing more than one ending, plan to come to a couple of different performances! We literally never know how the show will end until the audience tells us.

The Mystery of Edwin Drood is witty, mysterious, bawdy, romantic, melodramatic, insane, and all around good fun. There’s even a bar onstage for patrons wishing to enhance the merriment with beer or wine! Truly, this is a don’t miss.  And Vero Beach is a pretty awesome place to be during the winter!

And if you’re a Gotham fan, this is a chance to see a whole new singing and dancing side of the man behind Mr. Penn!  😉