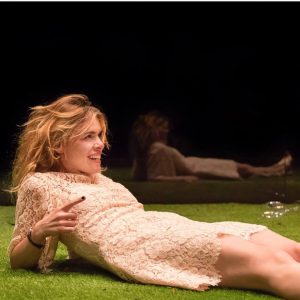 I’ve been so busy there hasn’t been much time for posts–but I’ll try to catch up with a few now!

My husband and I have been huge fans of Ms. Billie Piper since her performance as Rose in the reboot of our beloved Doctor Who.  We’ve loved everything we’ve seen her perform, including a heartbreaking Hero in an updated Much Ado About Nothing and in a chilling dual role in the three seasons of Penny Dreadful, among others.

When we heard her Olivier Award-winning performance in Yerma was coming to the Park Avenue Armory in NYC this Spring, we jumped to buy tickets before it even opened.  Her performance, and the entire production, burned itself into our memories.  However much we admired her work and knew she would be remarkable, we perhaps weren’t prepared for the utter raw abandon with which she attacked the tragic title role.  It’s a shame that this production couldn’t have been done on Broadway, where it would have been available to more audience members, and had much better recognition and award eligibility.  But given the unique design of the set (audience on both sides of a large plastic “box”) and Ms. Piper’s busy schedule, perhaps a Broadway run simply wasn’t possible.

I’m just grateful we were there to experience it.  The utterly magnificent adaptation and direction by Simon Stone gave Ms. Piper and her excellent fellow performers a claustrophobic contemporary world where nothing is really private–including one woman’s complete unraveling and implosion because she is unable to give birth.  Set design was also remarkable, and costumes and lighting were just right; this production was an organic whole start to finish.

Lorca’s play, and Stone’s adaptation, show in unsparing detail how focusing on the one thing you don’t have, instead of everything you do, can lead to madness and destruction.  It was a harrowing, unforgettable evening with images and a message that still comes back to haunt me.

This was simply one of the best performances, and productions, I’ve seen in my life.  The National Theatre Live did make a recording of a performance, and it is popping up here and there.  If it is anywhere near you, anytime: SEE IT!!!  You will never forget it.  For that matter, anytime Billie Piper does anything: see it.  She is always utterly honest, and utterly remarkable.