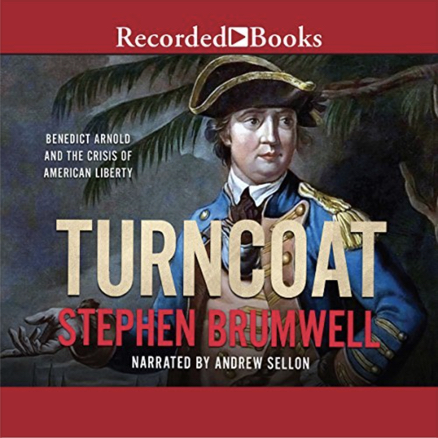 I’m thrilled to share that my latest title for Recorded Books, Turncoat, is now available, and it’s a cracking good tale. It’s also true.  Award-winning historian Stephen Brumwell turns his expert eye on infamous American traitor Benedict Arnold; he offers new evidence and a compelling argument as to the real reasons behind Arnold’s betrayal of the American independence movement. If you thought it was all about money, Brumwell will make you think again. In the process, Brumwell makes a strong case for Arnold’s time bearing a sobering resemblance to our own.

This is a thoroughly-researched and entirely engrossing account of the birth pains of America, and of what it takes for an avowed American patriot and war hero to turn his coat from blue to red. His recounting of the entirely accidental way in which the planned treason was uncovered, and what happened next, reads like a top-drawer Hollywood screenplay; it’s a true cinematic nail-biter.

If you’re a fan of American History, this book is an absolute “don’t miss”–and if you like listening to your American History, my audiobook version will give you about 17 hours of immersion in a remarkable true story.

You can order Turncoat on Amazon,

or you can buy the recording from Audible.

Either way, you’re in for a fresh and fascinating look at a critical moment in American History.  If you listen and enjoy, please be sure to leave a positive review on Audible and/or Amazon.  Thanks!

You can also learn more about historian Stephen Brumwell and his other works here.