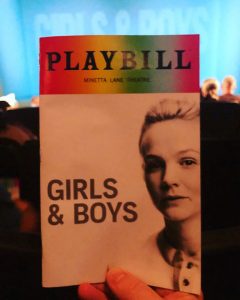 In Spring 2018, Off-Broadway was electrified by Billie Piper’s astonishing and gut-wrenching performance in Simon Stone’s superb updating of Lorca’s tragedy Yerma. And this summer we had another all-too-limited run: the always-remarkable Carey Mulligan in Dennis Kelly’s truly devastating new solo play, Girls & Boys.  But while Yerma ends with a loud bang, Girls & Boys closes with more of a terrifying whisper.

Alone onstage, Ms. Mulligan, guided by Lyndsey Turner’s sensitive direction, was a quiet force of nature.  She related the initially amusing tale of how she met her husband–then slowly revealed what happened, many years and two children later, when her husband couldn’t deal with her becoming more successful than he was.  The revenge he takes is unspeakably horrifying.  But Ms. Mulligan, aided by Kelly’s delicate script and Turner’s humane direction, helped the audience get through what they knew is coming.  And the statistics her character cited at the end are perhaps the most harrowing revelation of all.  To know how many times a year these family crimes are committed–almost always by estranged ex-husbands–is to know that there is something seriously wrong with the way men are raised to live in this world.  As Linda Loman says at the end of the great tragedy Death of a Salesman: Attention must be paid.

This was another hard-to-watch but utterly unforgettable theatrical event.  My husband and I have been fans of Ms. Mulligan since seeing the now-classic Doctor Who episode “Blink,” and Ms. Mulligan’s work onstage is every bit as human and honest and vulnerable as her work on large and small screens. If you missed the Off-Broadway run, it was produced by Audible.com, and there is an audio version of Ms. Mulligan’s performance available as well. Be prepared; it’s not an easy story to sit through, and it will likely leave you deeply shaken.  But it is beautifully done, and the message needs to be heard around the globe.