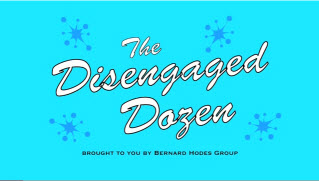 We were scheduled to shoot the six web ads for Bernard Hodes Group from 8:30am-4pm on Friday, 5/7.  The shoot went so smoothly that despite starting late due to some technical issues, we wrapped at 3:25!  It was a great day; everyone involved in front of and behind the camera was talented, nice, and fun.  I appeared in all six ads; six other actors appeared in one ad each, and I had a blast with each of them: Mallory Moye, Matthew Wages, David Perlman, Fleur Phillips, Guy Olivieri, and Kevin Resnick.  These were seriously funny people, and we had a blast filming each two-person ad.  Dewey Moss of Bernard Hodes directed his clever retro scripts.  My thanks again to Dewey, Bobbi, and everyone else at Bernard Hodes who made us feel so welcome, the wonderful crew, and my fab and funny fellow actors.  The series of ad spots is called The Disengaged Dozen.   Click the image to see more!