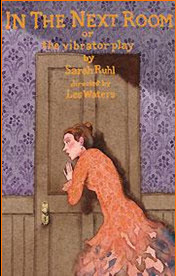 I’ve just now realized to my astonishment that I never got around to doing a post about the Broadway production of Sarah Ruhl’s play In the Next Room, or The Vibrator Play.  I’m particularly abashed, because it’s one of the best plays we’ve seen in a long, long time.  We caught it in its final week , and all I can say is that it deserved a much longer run, particularly with the beautiful production it was given.  The cast, including Michael Cerveris, Laura Benanti, Maria Dizzia, Quincy Tyler Bernstine, Thomas Jay Ryan, Wendy Rich Stetson, and Chandler Williams all navigated Ms. Ruhl’s delicate dance of romantic misfires (or perhaps I should say short-circuits) and unsatisfied longings with honesty, sensitivity, and genuine feeling.  Director Les Waters applied the perfect gentle touch to reveal the play to be in equal parts funny and moving.  I’m now in love with this script; Ruhl manages to show us a world where most attempts at intimacy fail, sometimes hilariously, sometimes heartbreakingly, while infusing each interaction with a genuine compassion for every character.  She even throws in a little touch of magic realism at the end that gives us hope for change.  Annie Smart did the beautiful and very practical set, David Zinn the gorgeous period costumes, and Russell Champa the evocative lighting; all three elements play particularly key roles in this story that deals with secrets behind a door, the sheer difficulty of getting a woman out of restrictive corsets and dresses with too many buttons, and the dawn of electricity.  The fact that this play was inspired by real historical elements only makes it more illuminating and potent.  When my partner and I saw the show, we brought along a couple of my friends from the Lewis Carroll Society of North America, who were visiting from out of town.  We all loved the play and the production, and when I saw my friends again a few months later at an LCSNA meeting, the first thing one of them said to me was: “I’m still thinking about that play.”  And I knew exactly how he felt!  I bought the script recently and read it, and it’s a lovely, grown-up, genuinely thought-provoking work.  I hope I’ll have a chance to play Dr. Givings someday soon; in the meantime, I’ll look forward to seeing more productions of this superb piece.  Well done, Ms. Ruhl, and well done all.  Now I can’t wait to see Ms. Ruhl’s adaptation of Virginia Woolf’s sublime Orlando!