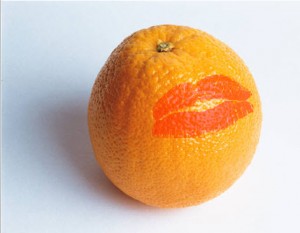 Every once in a while, I have an audition experience that’s just a hoot.  And sometimes all that fun leads to a great gig!  My agent recently scheduled me for a print ad audition for Minute Maid.  The  instructions were to show up looking like a particularly geeky and dull accountant type, mismatched shirt & tie, pocket protector, the whole nine yards.  My inner nerd always loves to come out for an airing, so off I went the next day.

When I arrived at the audition studio, I opened the door, and was met with a classic sight: fellow nerds were lining the benches on all three walls.  It’s hard to find the words to do it justice, but it was the classic audition visual: a variety of middle-aged guys decked out in intentionally unfortunate blazers, shirts & ties, thick glasses, with a clutch of pens sticking out of their breast pockets.  To make it even more sublime, each guy’s face was covered with peel-and-stick red and pink kisses.  The orange juice product in question was evidently a real life changer!

A very pleasant young woman came up to me, signed me in, and dutifully applied a healthy amount of plastic kisses to my face.  As I was waiting for my turn to go in, I addressed the other guys in the room in general and said “This is a photo moment.  We really should get a picture of this.”  To my delight, three other guys took me seriously, and we decided to ask one of the other people there auditioning to take a few pictures of us with my cell phone’s camera.  The casting director, Donna Grossman, came out to call in her next actor, looked around at her room full of kiss-covered nerds, and laughed out loud.  I had never met Donna before, but already I liked her.

When it was my turn to audition, Donna welcomed me into the room where she and her assistant were recording the images.  I slated my name, and then provided a left and right profile for Donna’s video camera.  We were all having a good time, joking as we went.  Then Donna told me that we were going to be doing a little improv, and she would interview me in character.  Donna made a great interviewer, and I just winged it, responding to her questions in my role as bland accountant turned love object.  Donna and her assistant were smiling and cracking up at my responses, and they were such a great audience that I thoroughly enjoyed the whole experience.

Two weeks afterwards, I finally found a minute to e-mail the cell phone photos to the other three actors, and received nice notes back.  I had mentioned that while the photos weren’t art, they did capture the giddy silliness of the experience.  One of the gents said in his reply “”Silliness” is a good word; “hired” would have been even better.”  I wrote back to say I could only agree.

The next day, Joe from my agent’s office called to say that I was on hold for the Minute Maid ad.  I had thought the selection process was long over and that one of the many other worthy hopefuls had landed the gig.  I was delighted to be mistaken.  The next afternoon, Joe called back to say “Congrats!  You booked Minute Maid!”  I was thrilled.  More on the shoot itself in another post.

I was going to post one of the silly pictures that four of us took at the audition, but now that I’ve booked the job, I won’t post it until after the ad campaign has launched.  So if you see me out there anywhere looking even more geeky than usual, covered with kisses, and clutching a container of Minute Maid orange juice, let me know!!