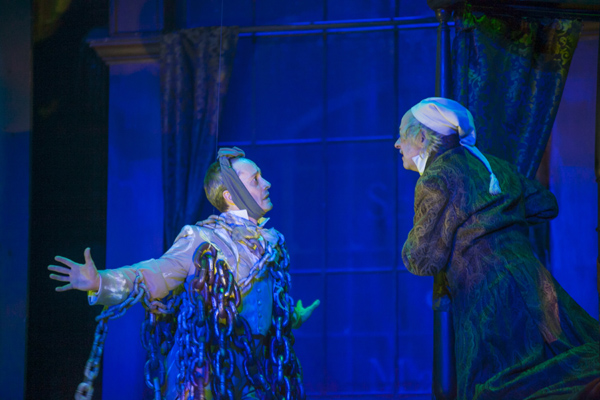 While I was born in Cambridge, MA and raised in Belmont, MA, the vagaries of Fate are such that for all these years I had never actually been hired to perform at a theatre in Massachusetts!  That all changed in a wonderful way in November and December of 2012, when I was hired to play the Ghost of Jacob Marley in the Hanover Theatre’s annual production of A Christmas Carol.

This production, and indeed the Hanover Theatre itself, owe a massive debt of thanks to Troy Siebels, who is Executive Director of the Hanover Theatre, as well as Adaptor and Director of this lovely holiday production.  Troy’s adaptation of Charles Dickens’ timeless tale of redemption is a carefully balanced blend of Dickens’ own narrative (delivered variously by the cast members over the course of the evening) with favorite holiday songs and carols to enhance each scene’s storytelling.  The cast of 31 (a remarkable number for any theatre in this day and age, and all the more remarkable because 16 of those were Actors Equity contracts!) sings, dances, narrates, and brings the tale of the almost-irredeemable Ebenezer Scrooge to life all over again. 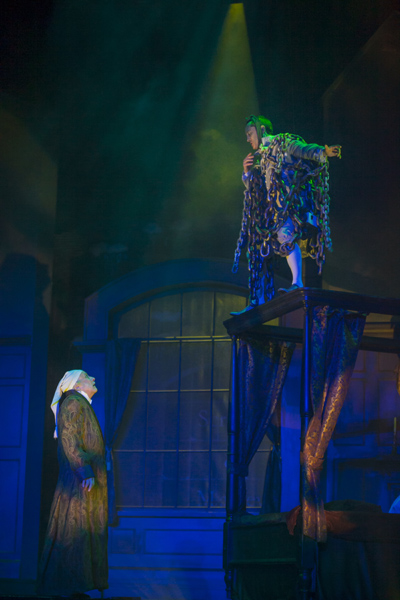 Much the same could be said of the theatre itself, originally built in 1904 as the Franklin Square Theatre.  Troy and a dedicated band of other local entrepreneurs have rescued this gem from potential ruin and decay, and turned it into a 2400 seat showplace, complete with a fully-restored Wurlitzer organ–one of a handful remaining on the East Coast.  The organ served as the perfect accompaniment for our show, as it does for many others that pass across the vast stage over the course of a calendar year.  It is one of the handsomest theaters I have ever worked in, and the show was as well run back stage by the local IATSE team as the theatre was out front by the gracious and efficient office staff (led by Office Manager Stacey Leigh O’Dell).  The community has a palpable investment in this beautiful venue, and you feel it the moment you speak to a member of the staff, or step inside the elegant auditorium.  In these challenging economic times, I find it all the more impressive that Troy and the other dedicated members of the Worcester Center for the Performing Arts have not only rescued this theatre for the community, but turned it into a genuinely successful business venture, as well!  It wouldn’t surprise me if other arts organizations across the country hear of this success story, and ask Troy to consult with them on how they can achieve such a feat in their own communities.  You can read more about the theatre on their web site.

I had a great time playing Jacob Marley.  I always love a new challenge, and in this case it was the fact that Jacob Marley had to fly.  And not just fly.  Fly up over 20 feet in the air, appear through fog and hallucinatory lighting, descend over the London rooftops of the gorgeous (and massive) set, and land on the top frame of Scrooge’s fourposter bed!  Troy and our wonderful Production Stage Manager, Carola Morrone Lacoste, were both there to oversee my session of flight training with the expert from ZFX, and once I got past the sheer amazement (and yes, some initial fear!) of being 20 feet up in the air on a single thin wire, we were able to leverage the flying mechanism to make Marley truly otherworldly. Each run-through of the scene helped me gain confidence in “owning” my flight pattern, and by the time we opened a few days later, I’m told the scene looked great.  I was excited to be able to use the flying mechanism to keep Marley from ever looking like a grounded mortal.  In addition to Troy’s direction, and Gail Buckley’s costuming, I couldn’t have created my Marley without the terrific teamwork of the Marley Crew: Assistant Stage Manager Candice Mongellow (head of flight crew and conductor of all flight cues!), Josh (vertical flight), Mike (horizontal flight), and Amanda and Jackie (wardrobe).  As an actor, I’m used to the fact that my performance includes the contributions of the Director and the designers.  But this was the first time where it literally took a team of four to create my character’s unearthly movement.  I couldn’t have been in better hands, and the confidence the team gave me translated to freedom onstage, so that I could enjoy playing the scene in a way I could never have done on my own. 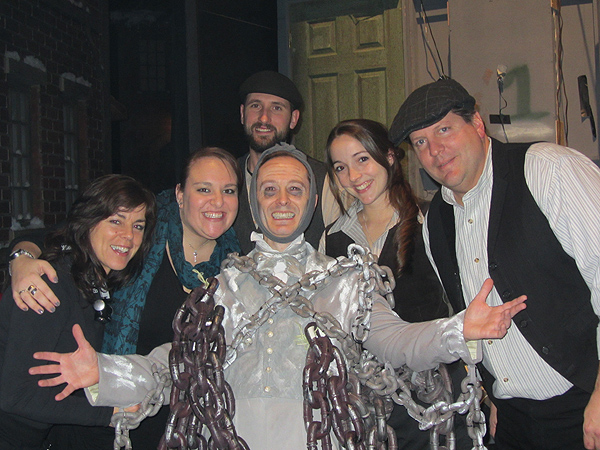 The rest of the cast was equally dedicated, and also a lot of fun.  And most of them, male and female, knew how to knit!  I’ve never seen anything like it.  We had an enormous amount of fun backstage.   There was even a holiday Secret Santa among the cast and crew; it’s a measure of Troy’s care in casting that everyone’s gifts were so clever and thoughtful, and that everyone had a great time.  All in all, it made for a delightful way to spend the weeks between Thanksgiving and Christmas.  And during tech I joined the knitting brigade, so I am now working on a scarf for Tim that I hope to have ready by next December!

My thanks again to Troy, Stacey, Carola, Candice, and everyone involved in The Hanover Theatre’s 2012 production of A Christmas Carol.  It was a blast.

Production photos by Scott Erb; courtesy of Troy Siebels and Stacey Leigh O’Dell from The Hanover Theatre’s 2012 Production.  Backstage photo by Rosie.  For a great shot of me in midair, as well as reviews of this production, visit my All Reviews and Photos page.