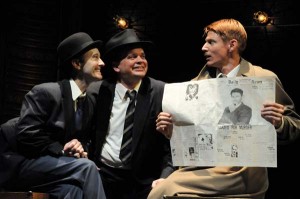 I was at an appointment-only commercial audition recently where I was reminded that there are still plenty of actors out there who are getting in their own way even before they set foot into the audition room.  The audition was running late, and the monitor checking people in and collecting headshots had her hands full.  As I sat waiting for my audition, I witnessed the following:

One guy arrived with a large piece of luggage and announced to the audition monitor that he had a flight to catch, and really needed to get into the audition room as soon as possible so he didn’t miss his flight.  Honestly: that’s not the monitor’s problem.  Next time, ask for an earlier appointment, arrive earlier, and assume there will be delays.  The monitor did finally take pity on him and let him cut in front of a number of actors who had been waiting quite a while (including yours truly).  But the fellow didn’t endear himself to anyone that day.

Another man (this call was only for men) kept trying to monopolize the monitor’s time.  She was an attractive young woman, and apparently the actor felt that applying his charms to the monitor incessantly would somehow improve his chances of getting the gig.  His behavior was just shy of hitting on her.  Having worked at a number of auditions, I can tell you that the monitor isn’t looking for a date or a friend, just to do his/her job, and just wants to be left to do that job.  The monitor at this audition tolerated it about as well as anyone could be expected to, but she finally had to let him know she was busy.  The actor shouldn’t have put her in that position.

Yet another fellow arrived asking to go in ahead of others who had been waiting.  And then to top it off, he produced two poor-quality headshots from his bag, and asked the monitor in all seriousness: “Which do you think I should use?”  Again, he may have been trying to engage the monitor and make himself memorable to her by enlisting her help.  But the monitor was understandably nonplused.  She looked at the guy, looked at the two sad pictures fleetingly, and then said “Um…I guess that one.”  The guy went to his seat happy, but he didn’t see the pained expression that flashed on the monitor’s face as he walked away.

Another man showed up, and made it clear that he hadn’t prepared the materials sent to the actors ahead of time (the audition sides, and viewing a sample video for the dialect they wanted).  He asked the monitor what he should focus on and if he could watch the video repeatedly now (which she let him do).  I’m not making this stuff up.

Remember, folks: the audition starts when you accept the appointment.  Do your homework.  By all means, always be cordial with the monitor, hopefully because you are a gracious, professional person and you treat everyone well.  And yes, the impression you make may indeed get back to the person holding the auditions.  But the monitor isn’t your date,  your buddy, your coach, or your caretaker.  The monitor has a job to do.  Respect that.  Respect your fellow actors.  Respect yourself enough to realize you don’t need any of that behavior.  And chances are, they’ll remember you–in a good way!