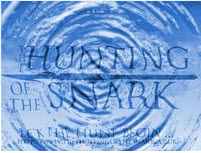 Well, I love the works of Lewis Carroll (after all, I’m President Emeritus of the Lewis Carroll Society of North America), and I love animation (with a special place in my heart for the painstaking labors of stop-motion animation), so perhaps this project was inevitable!  Nevertheless, I was delighted when director Saranne Bensusan invited me to provide the voice for a small role in her upcoming adaptation of Caroll’s timeless masterpiece, The Hunting of the Snark.  I am voicing the character of the Judge in the Barrister’s Dream sequence, and it’s a very trippy dream, indeed!  The other roles are being recorded in London, where the film is being created.  But happily I was able to record my audio files here in New York, and e-mail them to Saranne.  Ah, technology!  I gave her multiple takes of each line, so that she has some choices once she has the character created and the scene animated.  And the other actors recording that scene will be able to hear my tracks when they add their own.

You can find out more about the film by clicking the logo image on the right side of this post.  Saranne has taken Carroll’s poem, and interspersed snippets of it creatively throughout her script.  Purists will note that she has made some changes to the characters and events of the original poem, but having read the entertaining script, I can tell you that it remains true to Carroll’s spirit.  Look for it in June of 2012!