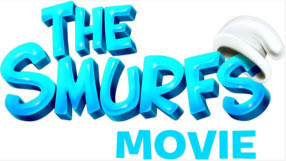 On Tuesday, June 1st, I was at the Russian Tea Room in Manhattan filming my “day principal” scene as a waiter who runs into the rude villain Gargamel in the upcoming Smurfs 3D movie, due out in August of 2011.  Director Raja Gosnell gave me a warm welcome while I was in the makeup trailer.  He couldn’t have been nicer, and his easygoing but clear guidance set the tone for the whole set.  He knew what he wanted, but was very open to spontaneous creativity as well.  My scene was with Hank Azaria, Sofia Vergara, and Tim Gunn, all of whom were very nice, and all of whom are very funny in the movie.  First AD Benita Allen was on top of every little detail, and kept things running like clockwork.  Watching her work with the crew on the specs, and with all the extras on believability and logic for every little background action, was really impressive.  Second AD Peter Thorell was very helpful prior to the shoot, reaching out with info about the shoot and making sure I didn’t have any questions.  My thanks also to Mike and Mary, who shuttled us back and forth to our trailers all day with unflagging good will, to Cheryl, Denise, Ben, and all the other costume folks, to Vinnie for makeup, and Angel for hair, my stand-in, John, and all the other members of the team and crew (including craft services), who worked cheerfully and tirelessly to keep us all percolating.  I also enjoyed chatting with Laurent Mullen and a number of the other actors playing the other waiters and customers.  What a lovely bunch of people.  I can’t say enough good things about the shoot because everyone, cast and crew, had such a great attitude.  A few of the takes reminded me of the old rule about working with children and animals.  The cats alternating in the role of Azrael were definitely frisky during the shoot!  Hank Azaria was hilarous improvising around their “cattitude.”  We had a lot of laughs, and despite the complexity of the scene, it was suprising how quickly the hours flew by.  A great day.  Thanks again to Casting Director Richard Hicks, and my agent, Reneé Glicker of About Artists, for making this possible.  And my extra-special thanks to my partner Tim, who insisted on getting up well before the crack of dawn with me, even though it was a work day for him, too.  Not only did he drive me to the train station, he waited with me on the platform to see me off for my first major studio shoot.  I felt like a kid going to his first day of school.  And he was there to pick me up when I got off the train, exhausted, at the end of it all.  I’m a lucky guy all around.  Thanks, everybody.